It’s been a grim month.

I say this not to extract sympathy, as I know we all have grim months, but to sort of highlight the effect it has on my work. The recent show was titled Cause and Effect and this is why. The latest piece is dark. Even I see it (I sometimes don’t!) stark in front of me, spread out on the table. I have strayed into charcoal, which anyone who knows me or my work will see as a departure. I am a clean and tidy worker. Charcoal has been for other spaces, drawing workshops, students, working with children… but not my studio.

And yet here it is. I still have a watercolour washed ground to work on, a pale ochre. The charcoal has been rubbed into the texture of the paper (this is why it was allowed in I think) and takes to it beautifully. The shapes and clouds and lines are familiar, still reminiscent of the bodily and the visceral. The blackness sucks me in. I try to layer it up to get it blacker and blacker, fixing and drawing over and over… And then, another layer of graphite working lies on the top, reflecting the light that the charcoal absorbs.

So this grim month? Some of it will stay with me forever. Deep and black. Ground in. Some I’ve been able to shake off. Some of it has left a smudge that will fade over time.

I love the metaphorical. In drawing and in words. To live in metaphors is so very human. 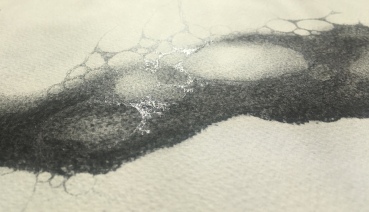