I feel I’m properly in now, which is surprising seeing as I haven’t got a door yet.

The shelves have nearly filled up. I do think I could probably bring some of the stuff in from the loft, so save us worrying about ten tons of fabric crashing through the bedroom ceiling, and it would make me sort it all out. Maybe.

It feels right. Home, but not home. The only space in the world that is totally mine. I have been without for eight months. People who follow this tale will know that in some ways, that’s worked out fine. But oh boy I was ready for it. It’s been on and off and on and off and on again for so long!

It can be an expense, yes, obviously. But the feeling you get from working in a studio is different. It is my professional space, not my hobby space. It is where I earn money – or at least initiate the process of earning money. It involves professionalism, validation, a seriousness of intent… That this thing I do here is legitimate. I find it hard to feel like the real thing at home. I know this sounds self indulgent and that many artists work at home, but I find I don’t think ”properly” at home. I pick at it. I write a bit, maybe for 15 minutes, then make a cup of tea. Then I might draw for an hour while someone is watching Pointless. Don’t get me wrong, I like watching Pointless as much as the next retired teacher or geography student, but that’s not where my head should be.

If I was an accountant no one would think that having an office was self indulgent, so why the hell is an artist’s studio? It isnt! I have to stop saying these things, we have to stop each other saying such things. We all do it. I’ve heard you!

I’m getting to the point now where I have done most of the unpacking and sorting and shelf stacking and can get on with the task of actually working.

Today Ian my band-mate popped round for a nosey, a coffee and a cake, and a bit of a strum and a sing. So that was good – even without the door! (we were the only ones in the building).

I have a proposal to write, an ACE project application, someone else’s application to support, I have recordings to make, drawings to draw, songs to sing…

And now I have a place to do it. 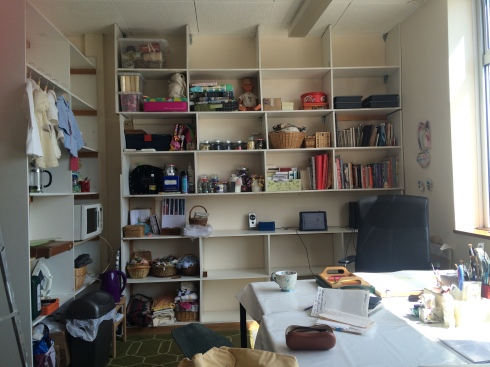 (I’m going to try to post one of those panorama photo things… if it doesn’t work I’ll take some ordinary photos tomorrow.)