It’s like learning a new language really… and there are levels of fluency to be achieved, from basic “one beer please” or “where is the toilet?”, to being able to express complex emotions, or write poetry.

I’m talking about the undertaking of a new artistic medium or method.
I can remember very clearly still (because it isn’t really that long ago) the day I actually said out loud “I am an artist” and actually believed it to be true, and didn’t hear the giggle of my internal critic.
I am fluent (enough) in certain things. I can draw. And I can stitch. I can’t draw like a photo-realist would draw. But I think I have a fairly high level of representational competence. I can draw a thing or a person that looks recognisable to another set of eyes. And I can make a variety of marks in the way that I intend them to be…
I can stitch probably better than I can draw. I can manipulate fabric and thread to a high standard… I can make the “stuff” do what I want it to do. It’s taken many many years of drawing and stitching to gain these skills. Using them to communicate my thoughts is another thing, of course, but, in recent years I feel able to say I am an artist, with confidence. Yep. That’s what I am. It even says that in my passport now.
So… the new language… songwriting… singing… performance…
There is in this too, in each of those things (because although they are connected in my practice, you can do one without doing the other two) a hierarchy of fluency. I doubt that I have the time left in my life to become as good as I could have been in terms of technical ability as I might have been if I’d started earlier, but I’m  doing it.
I am at the point with these things where I can say “I write songs” and “I sing in a band”. But I’m also still at the point where I can’t quite bring myself to say “I’m a singer-singwriter” because I don’t feel worthy. I’ve not put the time in. I don’t have the … what is it I don’t have? Anyway… I still have the internal critic sniggering when I talk about it.
Last week however, I performed with the band, songs that I had written (co-written) in a “proper” live music venue where I have previously sat in the audience and watched bands and singers I admire. This time, the other side of the mic. It felt slightly surreal. Other than my usual pre-gig session of contemplation and meditation in the loo, I didn’t feel any more nervous. It was great to do.
But… we (and by we I really mean I) hijack ourselves don’t we?
The venue is small and intimate. Extraneous gear is a problem. I usually have my lyrics in front of me, because the terror of performance for me, lies in forgetting the words. About three years ago I bought a special clamp so that I could use my iPad on the mic stand. But I have persevered in carrying around a huge heavy music stand and a folder full of paper instead. It can be impractical in terms of space, and sometimes the light isn’t good enough for me to read them anyway. But I make a big deal of erecting it and hiding behind it. Because apparently the iPad clamp thing is too professional a device for idiots like me… Says the internal critic.
Anyway, at this performance I used the iPad. It worked well. I had my paper with me, just in case the technology failed, but it stayed at the back of the stage, untouched.
The gig went well. I loved it! We were received well, our songs enjoyed and commented upon after, and we sold some cds too.
I’m wondering what it will take… and if I will ever get there?
But here is the crux of the matter… I’m doing it regardless. 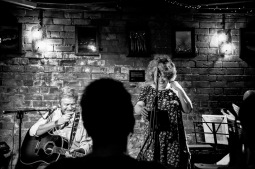 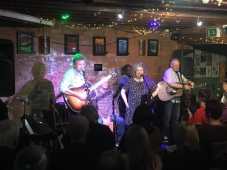