The nature of this blog is that is as much (if not more) for the writer as the reader. I try to capture those fleeting thoughts that affect my thinking… so that I can return to them to pin them down as they make themselves known in the work.

So here goes… this might be a bit of a ramble. When I get to the end I will read and edit for clarity if necessary…

I’ve just finished reading Mary Beard’s Women and Power. I admire this woman greatly, as we all should, frankly. She is full of knowledge and insight, her knowledge of the ancient casts light on the present. There’s a grand sweep about her writing that is deeply affecting.

Women and Power then. So far to be a powerful woman one has to be a parody of a man? We should be looking perhaps at what power is and how it manifests itself. Our definition of power being currently, inherently male. There is a passage in the book about the balance of women in government: our own being around the 30% mark, but that in Rwanda it’s 60%… indicating perhaps that the outward facing parliament is NOT where the power lies?

The power lies, says the wonderful Mary Beard, in being taken seriously.

Women being taken seriously is the issue then?

I look at my own work sideways…

Up until very recently my work has focused on the feminine, and the domestic: embroidery, bras, children’s clothes… my themes being the relationships between parents/adults/children…

I am still very proud particularly of the works “Are you listening?” and “Nine Women”. They still stand up well to scrutiny I think.

My recent work is more abstracted from these themes… concentrating on the essence of connection and touch. My materials have changed from the feminine and domestic to a more neutral, non-domestic pencil and paper (with a bit of ink or watercolour here and there). I have been wondering about the increase in Likes/Follows/Shares on social media by men since this change and why this might have happened.

(“We’ve already had a woman’s play in the programme this year” – yes that really happened!)

By switching materials, is it now more universal in its appeal? Women (on the whole) really understood the previous work, and I have had so many amazing conversations about those installations mostly with women, all sorts of women, artists and otherwise. The conversations with men about these works have been men that I already know, most of whom are artists themselves.

The work I am now doing in preparation for The Tenth Woman is getting rather dark… animal… visceral… and men seem to respond to this more readily, and are happier to talk about this than an old bra embroidered with barbed wire, or a child’s dress embroidered with abusive hand marks… equally dark in my eyes… but… what is going on here?

I must admit it is good to have a wider following, and different conversations. I do now however find myself wondering if this change in materials comes from an unexpected place? I still think the drawings are feminine… but what is the nature of graphite that makes it more neutral/acceptable to the male gaze?

I’m also puzzling over myself and my own change in attitude. There is an element of Don’t-give-a-fuckery about this. I used to pride myself on the accessibility of my work, that people could relate to the textile, the stitch, the domestic… I could easily explain what it was about to those who asked.

I now find I can’t be arsed to explain. Why the fuck should I? 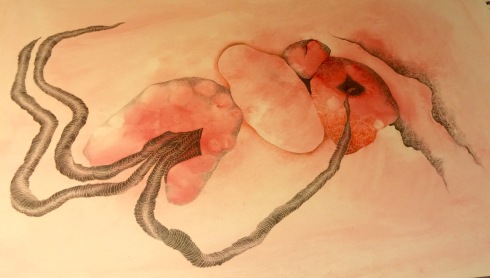