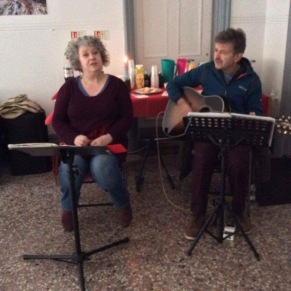 It’s been ages it seems… My feet haven’t touched the ground!

I’m sat with a piece of warm raspberry crumble-cake and a mug of Lady Grey tea, mulling over the events of my first open studio even at The Old Library Studios…
As always, I probably took on too much, and in addition to the already stressful prospect of opening my studio space, I also felt it necessary to arrange for the band to play… Originally just on the Saturday, but through a series of misprints (not Simon’s fault), shoddy proofreading, misunderstandings and what-the-hells, we ended up playing on the Sunday afternoon too. We had a good time. It was our first outing with Lloyd the percussionist, and it was great to have him there… I can really feel the difference in the dynamic opportunities these songs now have, with him sat to my right. It was an exercise in winging it too. We decided, with a percussionist, that now I would definitely need to be amplified, as my vocal is ok, but I don’t exactly belt it out! This was fine, except that ten minutes before the guys arrive, the power goes out! This has several implications in this building… Not just the fact that my voice won’t be as loud.

It’s December, it’ll be dark around 3:30, but even by 2:30, you can’t really see the art properly unless you happen to be carrying a decent torch.

We are at the top of a Victorian building, that is never really warm from about the middle of September. As soon as all forms of heating went off, the temperature plummeted within minutes and people were huddling into their coats and hats and scarves. 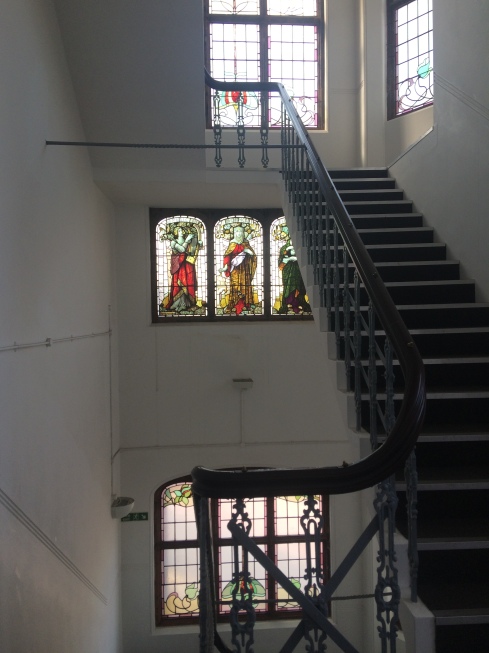 It’s really hard to play guitar when you’re cold. Lloyd kept his gloves and jumper on. Advantages of being percussionist over guitarist…

But… What it did was show us that we can adapt our line up and performance to a variety of circumstances: I pulled my chair forward about three feet, Lloyd held back on his noisier excesses, and strumming was gentler. The natural acoustics of the building helped, and we managed an unplugged set that sounded ok, even if looking at us was a little odd!

On the Sunday, power was restored, and the adaptations were different, a single mic, just for my vocals was set up and the balance seemed good… Except I had to pull back from the mic when Andy or Ian took the lead vocal on a couple of songs (Their more experienced deeper and stronger male voices coped better without a mic).
Every single performance so far has been different. Just when I think I have a handle on it, I’m thrown by something new. Every single microphone is different, every single room is different. Some of the variables I can control, or be advised by my band mates how to cope, but mostly, every gig is completely new. I am extraordinarily fortunate to have them with me. The band relationship is also new to me, but I like it. I grew up with two older brothers looking after me… In some ways this is very similar, and I love it! There are rude jokes, teasing, people have slotted into their own predictable roles comfortably. It is like having an extra family in a way.

The new year brings new challenges. We are arranging more live performances and more rehearsal nights. We are being self critical, which is excellent. Some things work, some don’t, we know what they are and can put them right with practice. The songs, bless them, are starting to gel together… The dodgy endings have become smoother, and the transitions that at first seemed clumsy are settling down and feeling right. This is a stage of the process I am so far unfamiliar with… Fine tuning… Moulding… Development… All in a completely different order to any visual work I have done. The processes and differences fascinate me…. But I am aware that I can get a bit boring on the matter, so I’ll stop now….